By pairing a custom Phoenix Channel with our LiveView, with the help of a Registry, we can respond to LiveView events with custom JavaScript on the client-side to provide better UX.

LiveView has given us the ability to implement flexible and responsive UX almost entirely with server-side code. But what happens when our need for a responsive UI surpasses what LiveView seemingly offers? When the demands of a particular feature have us reaching for JavaScript? It is possible to incorporate custom JS into the LiveView life cycle with the help of a custom LiveView channel and a Registry. Keep reading to see how we did it!

In a recent post, we built a straightforward chatting application backed by LiveView, PubSub and Presence. We implemented nearly all of the necessary features (live updates as users type in new messages, a list that keeps track of users in the chat room and who is typing!) with only 90 lines of LiveView code.

But then we ran into a blocker.

When new chat messages were appended to the chat window, they appeared just out of frame. 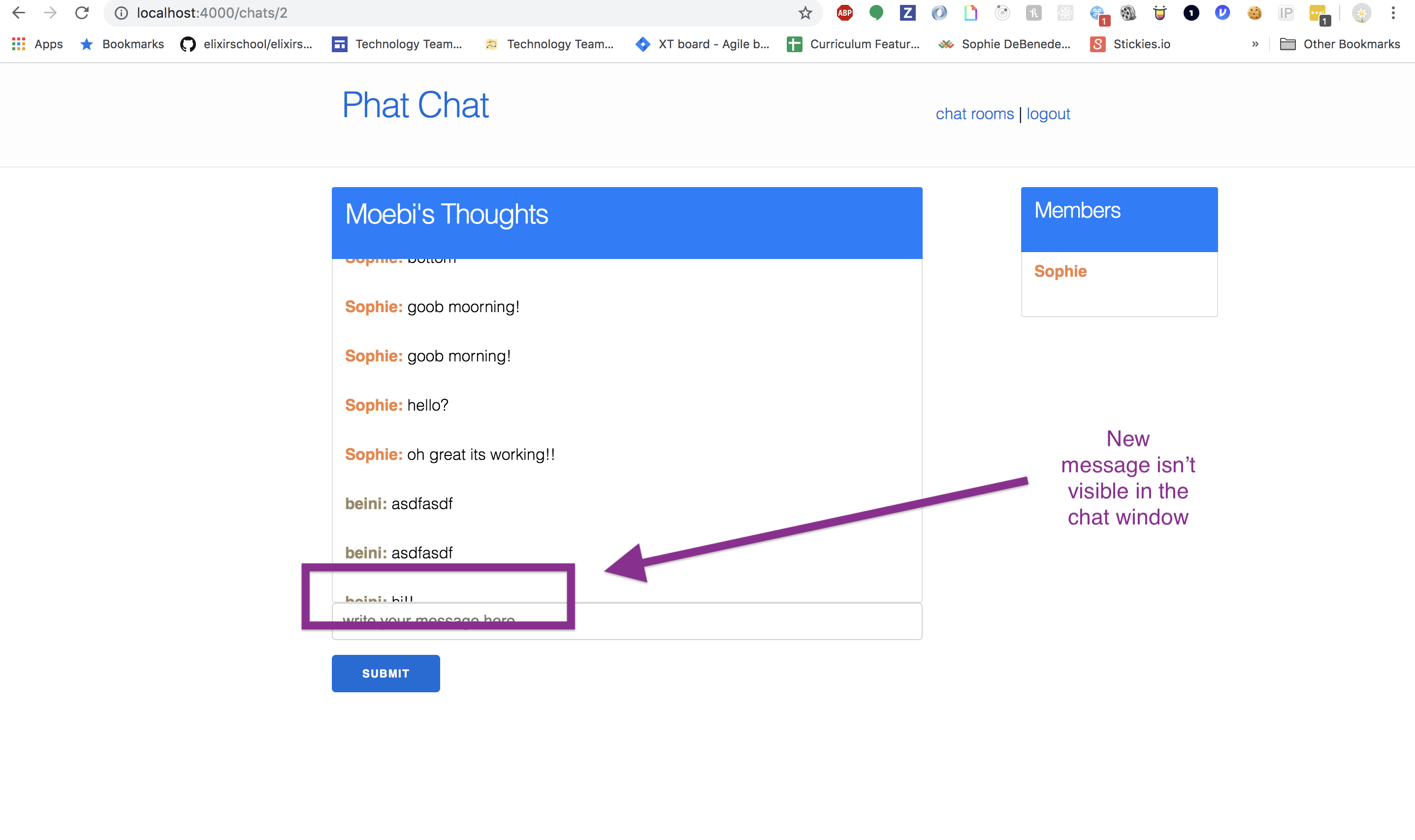 The chat window needed to scroll down to accommodate and display the new message. This is easy enough to do with just one or two lines of JavaScript: grab the height of the chat window, and set the scrollTop accordingly.

But wait! The LiveView client-side library only responds to one event from the LiveView process running on the server––the diff event. This event isn’t granular enough to tell us what changed on the page. It merely forces the appropriate portions of the page to re-render.

So, how can we get our LiveView to emit an event that our front-end can respond to in order to fire our scrollTop-adjusting JS?

We need to do a few things in order to get this working:

It’s worth noting here that the responsibility of a custom LiveView channel should be narrowly scoped. LiveView can and should handle almost all of the updates to the LiveView template. That’s the beauty of LiveView! We don’t need to write a set of custom client-side functions for updating the page based on specific events like we’ve become used to doing when working with Phoenix Channels. However, when we need to trigger a client-side interaction, like our scrollTop adjustment, that the LiveView client isn’t capable of handling, we can reach for a custom channel.

Now that we have a basic understanding of the problem we’re trying to solve, and the tools we’ll use to solve it, let’s get started!

Before we start writing code, let’s walk through the desired code flow of this feature, one step at a time.

There is a lot of code to get through, so we’ve organized our approach into the following parts:

I. Establishing the Socket and Channel

II. Handling Events in the LiveView

III. Communicating from the LiveView to the Channel

IV. Sending Messages From the Channel to the Front-End

If you’d like to follow along with this tutorial, we recommend reading and completing the tutorial in our previous post here first. This will get your code into the correct starting state. You can also clone down the repo here to get the starting code. Otherwise, you can checkout the completed code here.

Part I: Establishing the Socket and Channel

In order to guarantee that the live view process can send a message to the right channel at the right time, we need to have the live view share a socket with that channel. Let’s start by focusing on this portion of the code flow:

Here’s a closer look at how this procedure works: 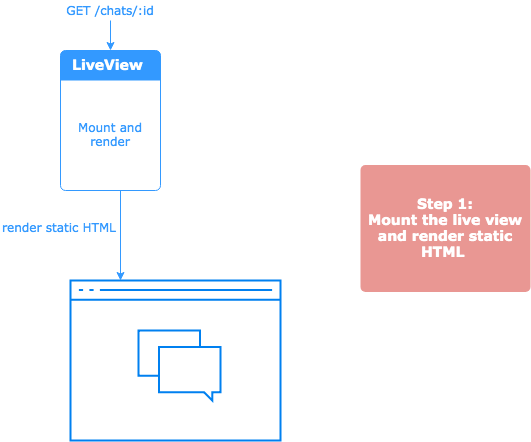 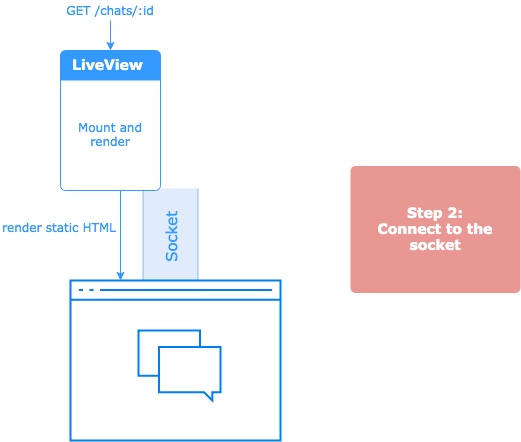 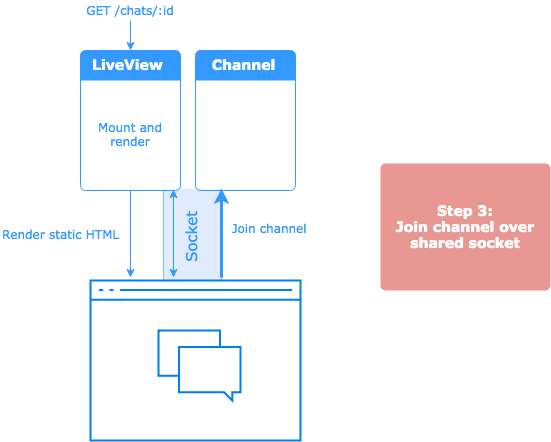 Let’s dive in and write some code!

The only line we need to add in addition to what we’ve copied from the LiveView source code is the channel definition in which we map the topic, "event_bus:*" to our soon-to-be-defined custom channel.

Next we’ll tell our app’s Endpoint module to map the socket mounted at the "/live" endpoint to the socket we just defined:

Connecting to the Socket and Joining the Channel

With our socket and our channel defined, we can tell the front-end client to join the channel after connecting to the LiveView socket:

Now, when the page loads, we will:

Later, we can write some code on the front-end to respond to a specific event by changing the chat box’s scroll height:

So, how can we get our channel to send the "new_message" event to the front-end? Let’s find out!

In this section, we’ll dive into the following portion of the process:

Here’s a closer look at this flow: 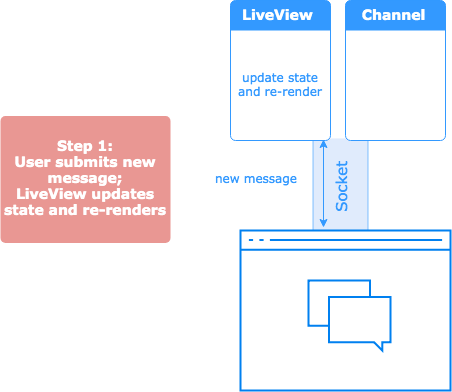 Receiving Events in the LiveView

When a user submits a new message via the chat form, it will send the "new_message" event to the LiveView process, over the socket. Our live view process already responds to this message by:

To get a refresher on how this works, check out our earlier post here. In this post, we’ll just take a brief look at that code:

Its important to note that the live view is broadcasting the message to all of the LiveView processes subscribed to the chat room’s topic, including itself. However, LiveView is smart enough not to re-render a page for which there are no diffs, so this isn’t an expensive operation.

Sending Messages from the LiveView to the Channel

We need to ensure that the page has a chance to re-render before we have the channel send the message to the front-end. Otherwise the JavaScript function to adjust scrollTop might run before the new message is present on the page, thereby failing to actually make an adjustment to the chat window.

After this handle_info/2 function returns is the point at which we can be sure all LiveView templates are re-rendered:

So, how can we make sure each LiveView process handling this message will only send a message to the channel after this function finishes working? We can use send/2 to have the live view send a message to itself! Since a process can only do one thing at a time, the live view process will finish the the current work in the handle_info/2 processing the "new_message" event before acting on the message it receives from itself.

Part III: Communicating from the LiveView to the Channel 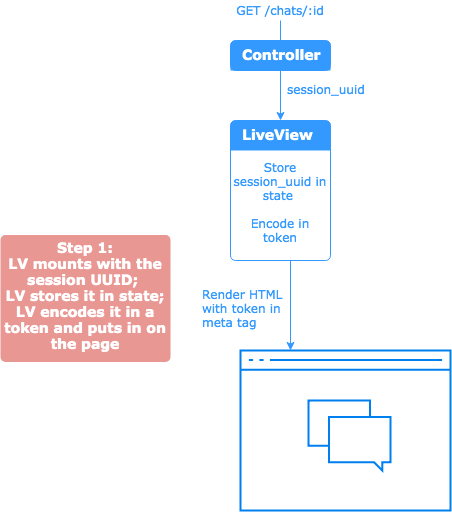 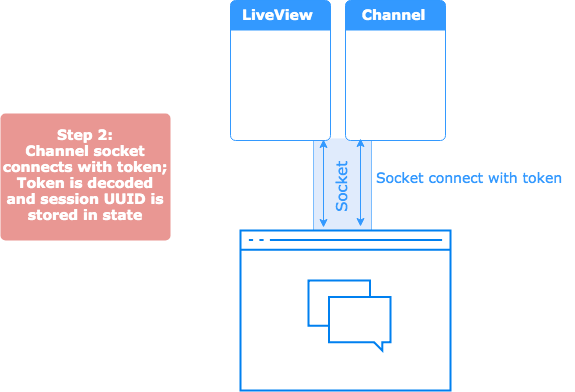 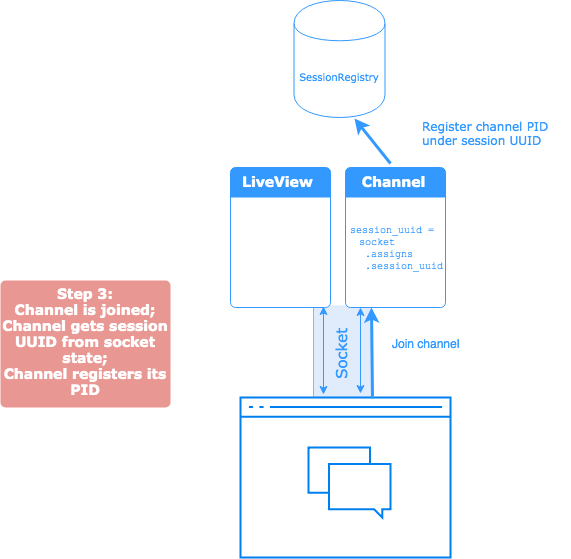 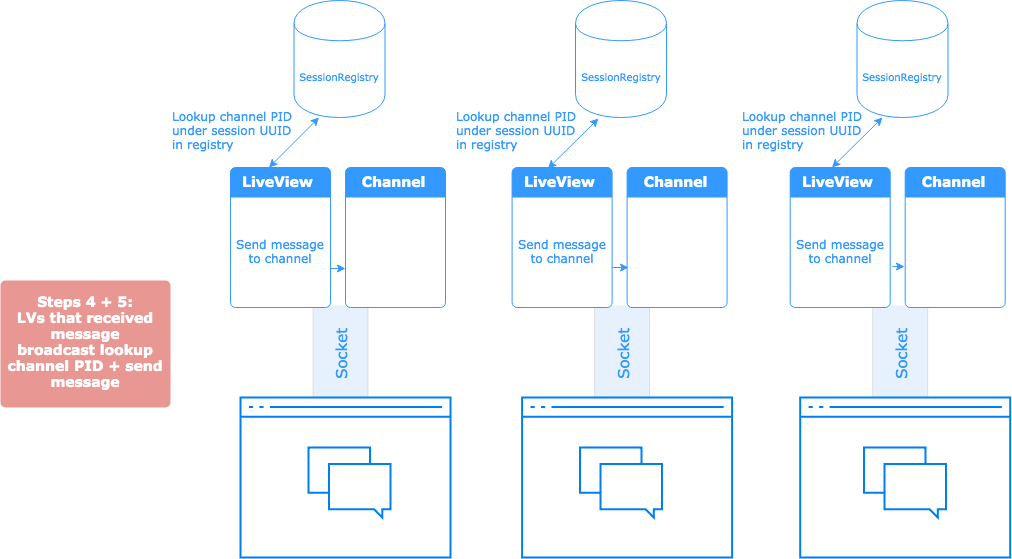 We’ll use a process registry, implemented with Elixir’s native Registry module, to keep track of the channel PID so that the LiveView can look up its associated channel in order to send it a message.

Its important to note that Elixir’s Registry module isn’t distribution friendly––if you look up a given PID created on one server on a totally different server, there’s no guarantee that it will refer to the same process. But! Since our channel shares a socket with the LiveView process, it is guaranteed that the live view and the channel are running on the same server.

We want to register our channel PID when the channel is joined. But we need to store the PID under a unique key that the live view can use to look it up by later. So, we need to create such an identifier and find a way to make it available to both the live view and the channel.

When the LiveView first mounts via the controller, we’ll create a unique identifier––a session UUID––to store in the live view’s state:

Let’s take a look at how we will give our channel access to this token.

We’ll include the token in our socket connection request on the front-end:

And we’ll have the PhatWeb.LiveSocket.connect/3 function verify the token, extract the session UUID and store it in the channel socket’s state:

Now, when we join the channel, we can look up the :session_uuid in the channel socket’s state and use it to register the channel’s PID in the SessionRegistry under a key of this UUID:

Now our registry is up and running, and we’re registering a given channel PID under a unique identifier (session UUID) that live view with which the channel shares a socket connection is aware of.

We’re ready to have the live view send a message to its channel!

Sending Messages to the Channel

Next up, we need to teach our channel to respond to this message.

Part IV: Sending Messages from the Channel to the Front End

In this section, we’ll focus on the following portion of our process:

Receiving Messages in the Channel

We need to define a handle_info/ in the ChatChannel that knows how to respond to "new_message" messages by pushing them down the socket to the front-end.

Responding to Messages on the Front-End

On the front-end, our channel JS is ready and waiting to fire:

Now, right after the page re-renders, the channel will receive the "new_message" message and push it to the client which is listening for just this event. The client reacts by firing our scrollTop adjustment JS and the user experiences a responsive UI––a chat window that automatically and seamlessly scrolls down to accommodate new messages in real-time.

We’ve seen that a seeming “limit” of LiveView can be surpassed by incorporating available Phoenix real-time tools––in this case Phoenix Channels. The work in this post raises the question: “What should LiveView be capable of?” Is the extension of LiveView with a custom Phoenix Channel a violation of the “purpose” of LiveView? Does such a use-case mean we should eschew LiveView in favor of Channels?

I think there are still distinctive advantages to using LiveView to back a feature like our chat app. Almost all of the chat functionality is handled in less than 100 lines of LiveView code. This is as opposed to all of the Channel back and front-end code that you would otherwise write. So, I would like to see LiveView become more extensible and configurable, making it easier to incorporate custom channels out-of-the-box.