We can’t guess about which functions are fast and which are slow - we need actual measurements when we’re curious. That’s where benchmarking comes in. In this lesson, we’ll learn about how easy it is to measure the speed of our code.

While there is a function in Erlang that can be used for basic measurements of a function’s execution time, it’s not as nice to use as some of the available tools and it doesn’t give you multiple measurements to get useful statistics from, so we’re going to use Benchee. Benchee provides us with a range of statistics with easy comparisons between scenarios, a great feature that allows us to test different inputs to the functions we’re benchmarking, and several different formatters that we can use to display our results, as well as the ability to write your formatter if desired.

To add Benchee to your project, add it as a dependency to your mix.exs file:

The first command downloads and installs Benchee. You may be asked to install Hex along with it. The second compiles the Benchee application. Now we’re ready to write our first benchmark.

An important note before we begin: When benchmarking, it is important to not use iex since that behaves differently and is often much slower than how your code is most likely being used in production. So, let’s create a file that we’re calling benchmark.exs, and in that file we’ll add the following code:

Now to run our benchmark, we call:

And we should see something like the following output in your console:

Of course, your system information and results may be different depending on the specifications of the machine you are running your benchmarks on, but this general information should all be there.

At first glance, the Comparison section shows us that our map.flatten version is 1.94x slower than flat_map. It also shows that on average it is about 390 microseconds slower which puts things into perspective. All helpful to know! However, let’s look at the other statistics that we get:

There are also other available statistics, but these five are frequently the most helpful and commonly used for benchmarking, which is why they are displayed in the default formatter. To learn more about the other available metrics, check out the documentation on hexdocs.

One of the best parts of Benchee is all the available configuration options. We’ll go over the basics first since they don’t require code examples, and then we’ll show how to use one of the best features of Benchee - inputs.

Benchee takes a wealth of configuration options. In the most common Benchee.run/2 interface, these are passed as the second argument in the form of an optional keyword list:

The available options are the following (also documented in hexdocs).

It’s important to benchmark your functions with data that reflects what that function might actually operate on in the real world. Frequently a function can behave differently on small sets of data versus large sets of data! This is where Benchee’s inputs configuration option comes in. This allows you to test the same function but with as many different inputs as you like, and then you can see the results of the benchmark with each of those functions.

So, let’s look at our original example again:

In that example we’re only using a single list of the integers from 1 to 10,000. Let’s update that to use a couple different inputs so we can see what happens with smaller and larger lists. So, open that file, and we’re going to change it to look like this:

You’ll notice two differences. First, we now have an inputs map that contains the information for our inputs to our functions. We’re passing that inputs map as a configuration option to Benchee.run/2.

And since our functions need to take an argument now, we need to update our benchmark functions to accept an argument, so instead of:

Now you should see output in your console like this:

We can now see information for our benchmarks, grouped by input. This simple example doesn’t provide any mind blowing insights, but you’d be surprised how much performance varies based on input size!

The console output that we’ve seen is a helpful beginning for measuring the runtimes of your functions, but it’s not your only option! In this section we’ll look briefly at the three other available formatters, and also touch on what you’d need to do to write your formatter if you like.

Benchee has a console formatter built in, which is what we’ve seen already, but there are three other officially supported formatters - benchee_csv, benchee_json and benchee_html. Each of them does exactly what you would expect, which is writing the results to the named file formats so you can work with your results further in whichever format you like.

Each of these formatters is a separate package, so to use them you need to add them as dependencies to your mix.exs file like so:

While benchee_json and benchee_csv are simple, benchee_html is actually very full featured! It can help you produce nice graphs and charts from your results easily, and you can even export them as PNG images. You check out an example html report if you’re interested, it includes graphs like this one: 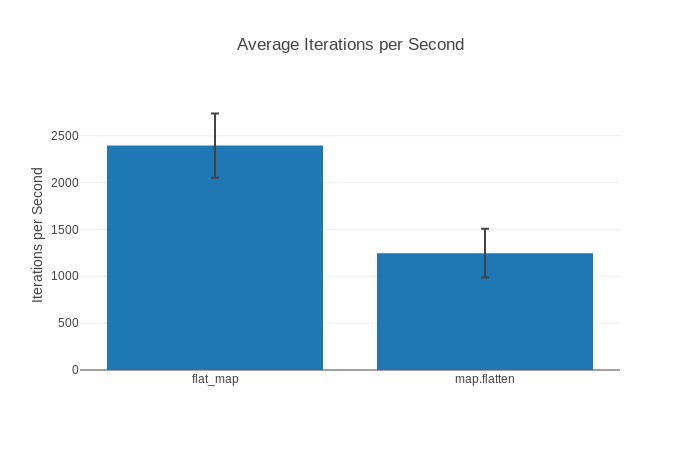 All three formatters are well-documented on their respective GitHub pages, so we won’t cover the details of them here.

If the four offered formatters aren’t enough for you, you can also write custom formatter. Writing a formatter is pretty easy. You need to write a function that accepts a %Benchee.Suite{} struct, and from that you can pull whatever information you like. Information about what exactly is in this struct can be found on GitHub or HexDocs. The codebase is well-documented and easy to read if you’d like to see what sorts of information could be available for writing custom formatters.

You could also write a more full featured formatter that adopts the Benchee.Formatter behaviour we’ll stick with the simpler function version here.

For now, we’ll show a quick example of what a custom formatter might look like below as an example of how easy it is. Let’s say we just want an extremely minimal formatter that prints the average run time for each scenario - this is what that might look like:

And then we could run our benchmark like this:

And when we run now with our custom formatter, we would see:

We’re almost all the way to the end, but we’ve gone all this way without showing you one of Benchee’s coolest features: memory measurements!

Memory consumption includes all the memory your benchmarking scenario used - also the memory that was garbage collected so it does not necessarily represent the maximum process memory size.

How do you use it? Well you just use the :memory_time option!

As you can see, Benchee doesn’t bother displaying all the statistics as all samples taken were the same. This is actually quite common if your functions don’t include an amount of randomness. And what good would all the statistics be if they just told you the same number all the time?

Caught a mistake or want to contribute to the lesson? Edit this lesson on GitHub!

If you’re familiar with Ruby you can think of Plug as Rack with a splash of Sinatra. It provides a specification for web application components and adapters for web servers. While not part of Elixir core, Plug is an official Elixir project.

After we set up our minimal web application, we’ll learn about Plug’s router and how to use multiple plugs in a single web app.